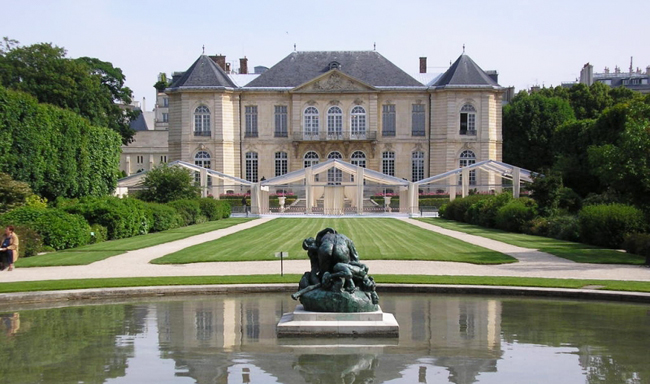 French sculptor, Auguste Rodin is known as the father of modern sculpture and a visionary draughtsman.The Musée Rodin in Paris, France was opened in 1919 and is dedicated to the works of this prolific artist. The museum welcomes over 700,000 visitors every year.

Described as one of the most beautiful museums in Paris – a “gem” in the middle of the bustling French city of Paris; this gorgeous and romantic human scale museum and stunning park-like garden is a tranquil and magical experience for all visitors.

The Museum is set in a large Chateau surrounded by beautifully manicured gardens, where many of Rodin’s spectacular larger than life sculptures are displayed. The 7 ½ acre garden is divided into four areas – the rose garden, terrace, flowerbed and wooded areas. One of his most popular and powerful pieces “The Thinker”, is prominently displayed. There is a brief description of his work & some of his words and reflections, featured on the trees.

The lovely Hotel Biron, where the Rodin museum is housed, is an 18th-century mansion on the property which houses Rodin’s works in various stages of completion, as well as works by his mistress and muse Camille Claudel. Rodin himself lived and worked in the house for many years, along with various other French artists and creatives. In later years, he donated all his works to the French government. There is also a small painting selection including works by Van Gogh, Renoir, and Monet. Over two levels of exhibitions featuring Rodin and these other classic artists.

Inside the museum, you will find his large collection of busts and beautiful marble, terra-cotta, and bronzes pieces –“The Kiss”, “The Gates of Hell,” and “The Monument to the Burghers of Calais.”

There is also a Chapel area, which was previously a boarding school for girls, run by three nuns who purchased the property in 1820. During their occupancy, many changes were made to the buildings and several small chapels were built. In 2005, the chapel was fully renovated and rehabilitated.

For Rodin lovers & art enthusiasts, there is no better way to see his spectacular work up close and personal.