Dive into the Renaissance jewel of Florence, including the Duomo and Uffizi Gallery, on this five hour combo tour. Join your guide on a private tour to maximize every minute in Florence, without missing a thing.

Explore the city center, including a visit to one of the world’s most beloved statues at the Academia. Here you’ll learn all about David, by Michelangelo, as your guide discusses this artistic genius and the enormous marble statue that he carved. Outside, you’ll hit the streets of the city center, visiting squares like Piazza della Signoria and Piazza della Repubblica where Florentine history has unfolded over the centuries.

Your guide will introduce you to the Ponte Vecchio, the only bridge over the Arno to survive World War II. Trace the history of the noble Medici family, the drivers behind this once illustrious and wealthy city. Look up to the imposing Duomo, an architectural beauty, just like Leonardo da Vinci may once have done. Learn about the church and its stunning bronze Baptistery Doors.

After a break for lunch, experience more Renaissance art at the most visited museum in Italy, the Uffizi. Originally built as offices, or uffizi in Italian, for the Florentine magistrates, the building eventually changed roles. In the 16th century it adopted the Medici family’s massive art collection. The structure has seen a lot of action over the years, including a mafia car bomb and severe flooding. Today, thanks to modernization efforts, Florence has brought the Uffizi into the 21st century, making it a world-class museum.

As it overlooks the Arno River, the Uffizi is a photogenic marvel itself. It’s the artists whose work is hanging on the walls, however, who are the real stars. The museum features more than 100 rooms highlighting Renaissance artists like Caravaggio and Titian, among other Italian masters. Your guide will tell you the secrets and stories behind several important works, like Raphael’s “Self Portrait.” You’ll witness first-hand Botticelli’s “Primavera” as well as his iconic “Birth of Venus,” a painting that has been a part of popular culture for years. This combo tour will ensure that you get the most out of your Florentine excursion. 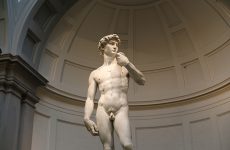 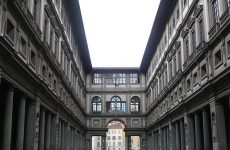